Assassin’s Creed II: The fight between good and evil

Besides the amazing hoods and the powerful fashion trend it set, Assassin’s Creed is a gorgeous story of the fight between bad and evil. Set in the 21st century, during the Italian Renaissance, the game’s story gives us the Assassins (fighters who want peace and a free world) and the Templars (characters who want to achieve world domination).  Sound familiar?

The game was produced by Ubisoft and was released in 2009 for PS3 and Xbox 360. Since it was such a big hit, producers made it available for PC and Mac computers as well.

Assassin’s Creed II is one of the most popular games in the industry and this is due to the fantastic combination between flawless gameplay, gorgeous imagery, and mysterious characters. The gameplay is open and there is not a specific line of events. As the game character, you are free to roam around rooms, jump on and from roofs and explore the world developers created for you. 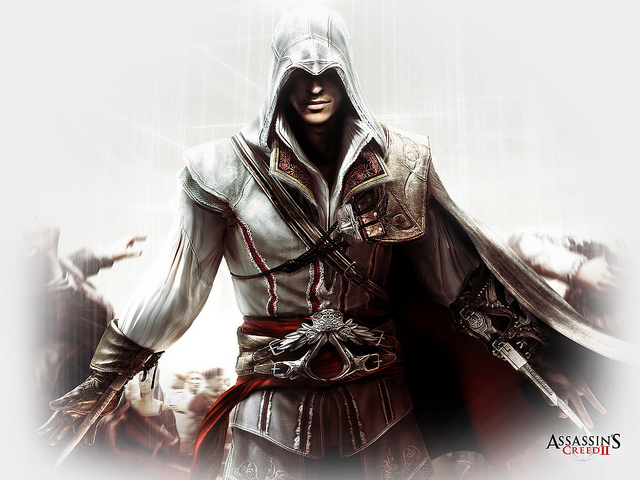 If you love Italy, especially during its glorious times, then Assassin’s Creed will quickly become your favorite game. You get to explore world-famous locations with a 15th-century setting and you get to discover challenging situations.

You even get to meet a young Leonardo Da Vinci which will help you decipher encrypted messages left by your predecessors. These messages will help you build machines and weapons which will be of use in the fight against the Templars. If this is not exciting enough, you can even interact with non-player characters (or NPCs) and the environment. For instance, you can hire mercenaries, thieves, or courtesans to help you with different tasks.

When it comes to fighting, Ezio (the main character) has access to a wide range of cool weaponry and some impressing combat skills. Ezio even knows how to blend in using the environment. Weapons can be created by Da Vinci or bought from commerciants on the street. Also, as the game progresses, you can even improve the aspect of your character’s clothes and his mansion.

In general, the action is made out of about 200 tasks which must be fulfilled in order to finish the game. However, there are also hidden locations that, if discovered, can reward the character with increased skills and experience. The best part about these locations is that they were created to represent real settings in the 15th century Italy. And, to make things more interesting, some characters are based on historic figures.

If you take a closer look, you’ll notice that Assassin’s Creed II is filled with mysteries and fantastic stories that make you think about magic and other occult forces. The setting of the game and the wide exploratory possibilities make it perfect for people who love to wander around discovering amazing things.

Comments Off on Assassin’s Creed II: The fight between good and evil